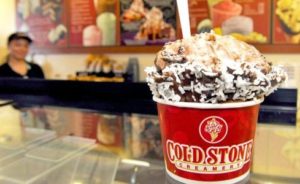 For more than 25 years we’ve served up the finest, freshest ice cream, cakes, smoothies and shakes using only the highest quality ingredients, and of course, our signature process of preparing your custom ice cream creation on a frozen granite stone.

Visited this location Monday night. When first walking in, we were greeted with signs claiming how sanitary the business and staff were. Upon standing in line, we noticed a customer get a cup of ice cream and began eating it in line. The customer then decided he wanted a waffle cone so the employee scooped his ice cream out of his bowl and into his cone with the same utensils that were used in the line. The in between talking trash about the management forcing the employees to come in while everyone was off they began laughing and spit in my ice cream (no masks). The employee offered to fix new ice cream for us. Then while fixing the rest of our order, another employee began digging in his long hair (no hair net) and wiping his nose with his bare hands (no gloves) and without washing his hands continued fixing our order. I know there is a staff shortage but the customers should not have to suffer the consequences of such disgusting behavior. We could not eat our ice cream fir being concerned about what extra may have inside.

I went on Monday (Labor Day) night at 8:30PM with a few friends. As soon as we walked in a young man told us they were closed. I mentioned to them if they are closed they might want to lock the door. The kid told me to F off. Also, the hours of operation stated on the door at 9PM and mentioned to please be patient they were short staffed. It is a shame to have an employee represent this company and behave the way they did. We weren't even allowed to go in b/c they were closed and treated horribly.

Extremely rude and poor service. My wife asked a question and the young lady server did not know the answer and had to ask a colleague. Then she started making fun of her accent after we walked away.

I’ve never had a bad experience or bad dessert from here. Servers move with purpose and talk to everyone equally. I come here every time I visit the movie theater and everyone honors face masks and spacing.

Yummy! Busy but the staff was amazing and got everyone what they asked for and out happy!